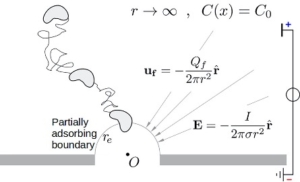 The interaction between nanoparticles dispersed in a fluid and nanopores is governed by the interplay of hydrodynamical, electrical, and chemical effects. We developed a theory for particle capture in nanopores and derived analytical expressions for the capture rate under the concurrent action of electrical forces, fluid advection, and Brownian motion. Our approach naturally splits the average capture time in two terms, an approaching time due to the migration of particles from the bulk to the pore mouth and an entrance time associated with a free-energy barrier at the pore entrance. Within this theoretical framework, we described the standard experimental condition where a particle concentration is driven into the pore by an applied voltage, with specific focus on different capture mechanisms: under pure electrophoretic force, in the presence of a competition between electrophoresis and electroosmosis, and finally under dielectrophoretic reorientation of dipolar particles. Our theory predicts that dielectrophoresis is able to induce capture for both positive and negative voltages. We performed a dedicated experiment involving a biological nanopore (α-hemolysin) and a rigid dipolar dumbbell (realized with a β-hairpin peptide) that confirms the theoretically proposed capture mechanism.