Blog - Latest News
You are here: Home1 / News2 / Cumulative Merging Percolation and the Epidemic Transition of the Susceptible-Infected-Susceptible... 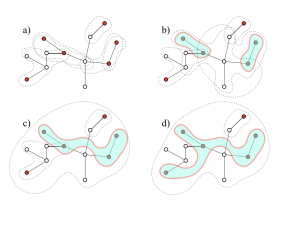 Complex networks represent the interaction pattern for many real-world phenomena such as epidemic spreading. The simplest and most fundamental model for the diffusion of infectious diseases without acquired immunity predicts a vanishing epidemic threshold in the limit of large systems. In other words, no matter how small the infectiousness of the disease, there is always a finite fraction of the overall population which is infected for long times. So far, the detailed mechanism underlying this phenomenology has remained unclear. Here, we provide a complete and quantitative understanding of the model’s behavior.

While the role of hubs (individuals with high connectivity) was already believed to be important, we fully clarify its nature, pointing out the highly nontrivial interplay among hubs. Each hub acts as an infection hotbed and the global epidemic emerges from hubs reinfecting each other. Surprisingly, this mechanism is at work even when the hubs are not in direct mutual contact but transmit the infection through chains of low-connectivity individuals. The survival of the epidemic is then a manifestation of a novel, long-range, percolation process among distant hubs, whose properties explain the behavior of the epidemic model.

These findings rationalize and reconcile previously published results and point out long-range indirect interactions as potentially crucial ingredients for other collective phenomena in networked systems.