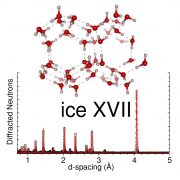 New porous water ice metastable at atmospheric pressure obtained by emptying a hydrogen-filled ice
Leonardo Del Rosso, Milva Celli & Lorenzo Ulivi
The properties of some forms of water ice reserve still intriguing surprises. Besides the several stable or metastable phases of pure ice, solid mixtures of water with gases are precursors of other ices, as in some cases they may be emptied, leaving a metastable hydrogen-bound water structure. We present here the first characterization of a new form of ice, obtained from the crystalline solid compound of water and molecular hydrogen called C0 filled-ice. By means of Raman spectroscopy, we measure the hydrogen release at different temperatures and succeed in rapidly removing all the hydrogen molecules, obtaining a new form of ice (ice XVII). Its structure is determined by means of neutron diffraction measurements. Of paramount interest is that the emptied crystal can adsorb again hydrogen and release it repeatedly, showing a temperature-dependent hysteresis.