Tau cleavage plays a crucial role in the onset and progression of Alzheimer’s Disease (AD), a widespread neurodegenerative disease whose incidence is expected to increase in the next years. While genetic and familial forms of AD (fAD) occurring early in life represent less than 1%, the sporadic and late-onset ones (sAD) are the most common, with ageing being an important risk factor. Intracerebroventricular (ICV) infusion of streptozotocin (STZ)—a compound used in the systemic induction of diabetes due to its ability to damage the pancreatic β cells and to induce insulin resistance—mimics in rodents several behavioral, molecular and histopathological hallmarks of sAD, including memory/learning disturbance, amyloid-β (Aβ) accumulation, tau hyperphosphorylation, oxidative stress and brain glucose hypometabolism. We have demonstrated that pathological truncation of tau at its N-terminal domain occurs into hippocampi from two well-established transgenic lines of fAD animal models, such as Tg2576 and 3xTg mice, and that it’s in vivo neutralization via intravenous (i.v.) administration of the cleavage-specific anti-tau 12A12 monoclonal antibody (mAb) is strongly neuroprotective. Here, we report the therapeutic efficacy of 12A12mAb in STZ-infused mice after 14 days (short-term immunization, STIR) and 21 days (long-term immunization regimen, LTIR) of i.v. delivery. A virtually complete recovery was detected after three weeks of 12A12mAb immunization in both novel object recognition test (NORT) and object place recognition task (OPRT). Consistently, three weeks of this immunization regimen relieved in hippocampi from ICV-STZ mice the AD-like up-regulation of amyloid precursor protein (APP), the tau hyperphosphorylation and neuroinflammation, likely due to modulation of the PI3K/AKT/GSK3-β axis and the AMP-activated protein kinase (AMPK) activities. Cerebral oxidative stress, mitochondrial impairment, synaptic and histological alterations occurring in STZ-infused mice were also strongly attenuated by 12A12mAb delivery. These results further strengthen the causal role of N-terminal tau cleavage in AD pathogenesis and indicate that its specific neutralization by non-invasive administration of 12A12mAb can be a therapeutic option for both fAD and sAD patients, as well as for those showing type 2 diabetes as a comorbidity.

See also a related post in the Outreach page (in italian). 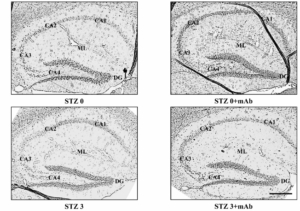 Histopathological alterations in the hippocampus of ICV-STZ mice are mitigated following 12A12mAb-mediated neutralization of the NH2htau. Representative images of hippocampal slices showing hematoxylin and eosin staining under examination with a light electric microscope at 4×. Scale bar = 50 μm. (B) 40× magnification of CA3 subfield. Notice that STZ alters the laminar organization and significantly increases the number of degenerating neurons with apoptotic disintegration of the nucleus (black arrows with heads). Following 12A12mAb treatment, neuroprotection is evident as shown by the presence of well-preserved hippocampal cyto-architecture characterized by viable neurons with healthy, not-damaged nuclei (arrows). Scale bar = 10 μm. 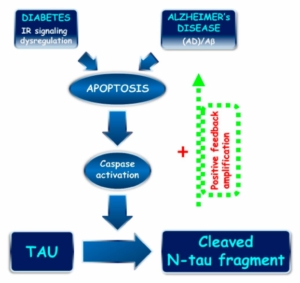