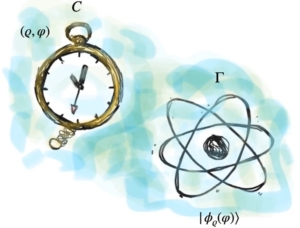 The figure shows the interaction between a  classical clock and a quantum system.

We draw a picture of physical systems that allows us to recognize what “time” is by requiring consistency with the way that time enters the fundamental laws of Physics. Elements of the picture are two non-interacting and yet entangled quantum systems, one of which acting as a clock. The setting is based on the Page and Wootters mechanism, with tools from large-N quantum approaches. Starting from an overall quantum description, we first take the classical limit of the clock only, and then of the clock and the evolving system altogether; we thus derive the Schrödinger equation in the first case, and the Hamilton equations of motion in the second. This work shows that there is not a “quantum time”, possibly opposed to a “classical” one; there is only one time, and it is a manifestation of entanglement.