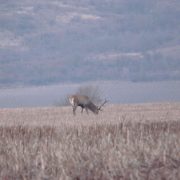 Two researches of the ISC (Stefano Focardi and Sonia Lombardi), together with Federico Morimando (Studio Proeco) have visited dr. Atidzhe Ahmed and Prof. Peter Genov, colleagues at the Institute of biodiversity and ecosystems research of the Bulgarian academy of sciences (IBER-BAS). The aim of the trip was to design a new project on the movement ecology of the red deer (Cervus elaphus) in Bulgaria. In this project, the Italian team acts as consultant for the Bulgarian team to design data collection and to select the appropriate materials and methods to be used. Critical aspects refer to animal capture and tagging. The scientific team: from left to right: Peter, Rossen, Atidje, Stefano , Federico and Sonia (below).

The project aims are (I) to understand the space use of red deer in typical Bulgarian landscapes, (II) to investigate and quantify the patterns of migration and (III) to monitor populations.
The team visited several potential study areas through Bulgaria. The mission started in Sofia with a meeting at the Ministry of Agriculture and Food, with the general coordinator of the project, Mr. Damian Damianov, to discuss about purchasing of materials, the participation of the IBER-BAS to the European initiative EURODEER and criteria for selecting the appropriate study areas. From Sofia we reached the Game Breeding Station (GBS) “Devin-Izvora” in the Rodopi mountains in Southern Bulgaria. Devin is famous for its mineral waters, and the area is very wild and views are nice. We met the director of the GBS, Mr. Nikolai Yankulov, and his collaborators. There are good chances to capture some deer and one corral, currently used for trapping wild boar, can be adapted for red deer. The wild boar trap in Devin-Izvora. To trap red deer it appears necessary to modify it for having a higher fence and to use a shadow screen to reduce disturbance to the animals. From left to right, Peter, Stefano, Sonia and Rossen. Then we crossed the Bulgaria from South to North East and first we met Mr. Cvetan Milanov, department chief at Gabrovo and then visited the GBS Palamara, where we had another meeting with the director Mr Seven Bashla. Then we visited the deer capture facility in the GBS. The structure is well done and potentially appropriate to capture many animals. The staff is enthusiast to work for the project. The final section of the corral in Palamara. We discussed the possibility to implement a crush to capturing deer. Such a facility may improve efficiency during the captures and security for both animals and personnel.

From Palimara we moved to “Cherny lom” near the town of Popovo. Interesting, the village is called Elinovo or “village of the deer”. The name is well deserved, since hundreds of red deer live in its vicinity. A buck at “Cherny lom”. It is possible to appreciate the landscape: a mosaic of large fields and wide patches of forests connected by a network of path and dirty roads.

The area is also very well suited for trapping deer. We had a meeting with the director, Mr. Grigor Gogov.
Moving northward, we met Mr. Veselin Ninov, department chief at Shumen. From there we moved to the extreme northeast, in the GBS Karakuz, where we met the director, Mr. Ivan Groichev. This area appears to be less promising because animal density is lower than in previous areas and no structure for capture is available at the moment.

Next updates of this project on March 2017, when a pilot attempt of capture should be performed.