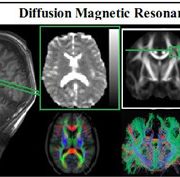 In the biomedical field, Diffusion Magnetic Resonance (DMR) images provide a measure of water proton displacements by probing motion on the mesoscopic length scale (around 10-20 µm), which is orders of magnitude smaller than the macroscopic MR resolution (typically 1-2 millimetres for clinical MR scanners).

Therefore, independently of image resolution (which is linked to the hardware of the NMR scanner) we can obtain microstructural information of human tissue at the mesoscopic length scale. Water diffusion is hampered, restricted, confined by tissue microstructures. Therefore, from water diffusion behaviour we can extract microstructural information. Considering this property of DMR and the non-ionizing nature of MR techniques explains why DMR methods have revolutionized the clinical neurodiagnostics over the last 20 years.

However, the DMR techniques currently used in clinical applications are still poorly specific and sensitive in detecting early structural changes due to diseases. In neurodegenerative Alzheimer’s disease, for example, amyloid plaque deposition between neurons, and intracellular neurofibrillary tangles occur. In others neuro-pathologies, astrocytes and glia react after injury with hypertrophy (swelling of the cell body) and proliferation, shape modification, neurons atrophy, membrane surface structural changes, with permeability modification. In multiple sclerosis (MS) disease, before macroscopic axonal degeneration currently detected by conventional DMR, an axonal shape modulation, myelin nanoscopic degeneration with increased roughness of the axonal surface occurs. None of above histological characteristics and submicroscopic changes are individually detected by conventional DMR parameters based on Normal diffusion of bulk water. Being able to probe the human tissues with a length scale below the micron, would dramatically increase the potential diagnostic of DMR investigations in detecting micro and sub-micro architectural changes of human tissues due to pathological damage.

On a statistical basis, the length scale, \(l_D\), by which we can explore diffusion phenomena and, as a consequence, probe media structures in soft condensed matter, is approximately \(l_D ≈ MSD^{1/2}. MSD=6DT_D\) is the mean squared distance travelled by molecules in a given interval of time; \(T_D\) is the diffusion time; and D is the diffusion coefficient, a useful parameter to characterize particle diffusion in the normal case. In the normal diffusion case, a linear scaling relation between MDS and \(T_D\) exists. Neutron scattering provides this information at a nanometer scale, but it is obviously not suitable, neither for in vivo studies in humans, nor to study materials with low cost instrumentation. DMR also relies on this principle.

Currently, DMR is the only non-invasive and non-ionizing method available to provide diffusion information on molecular displacements. They occur over distances of about 10-20 micrometers in human tissues (taking typical values for water diffusion and diffusion time achievable by conventional MR scanner, e.g., \(D≈10^{-3}mm^2/s\) and \(T_D≈50ms)\) and around 1µm in inorganic materials by using MR spectrometers dedicated to in vitro investigations with very large magnetic field gradients (ISBN 0198539975, 9780198539971;doi:10.1002/cphc.201402340). This explains the considerable success of DMR in chemical, physical, biological and clinical applications. In particular the non invasive observation of endogen water diffusion displacement in vivo provides an unique source of contrast for MR imaging (MRI) (ISBN 978-0-19-536977-9). Current DMR approaches are based on normal diffusion models of experimental data analysis. However, experimental and theoretical works reason and support that non-Gaussian diffusion in highly active areas of soft materials research plays a more relevant role than expected.

In non-Gaussian regime, diffusion coefficient is time-dependent, D=D(t). In particular, AD is characterized by a MSD of diffusing particles growing nonlinearly in time. \(MSD ∝ TD^v\) with \(v\lt1\) for pure subdiffusion. It is currently recognized that subdiffusion is a potential probe of submicroscopic organization. In particular, when hierarchical diffusion phenomena occur, mesodiffusion (>10μm) is influenced, by mesoscopic structures like grain boundaries, porous size and particle packing, by submicro-scale (>50 nm, <1μm) factors like particle size and the connectivity of pores. Moreover, micro/meso-scale diffusion are also dependent on the nano scale (<50 nm) structures, which depend on numerous factors such as materials and structures of solid surfaces.

However, there are some fundamental questions and controversial issues, which prevent the take-off of investigation technologies in soft condensed matter field, based on the Anomalous diffusion principles.

In the NMR and medical physics Laboratory of ISC, Gaussian, non-Gaussian and anomalous diffusion MRI methods are applied to improve the sensitivity and specificity of medical diagnosis.