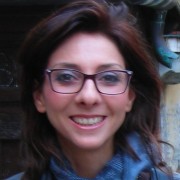 keywords: disordered photonics; optical wave-breaking; optomechanics; massive simulations
My research activity includes experimental investigations and numerical simulations for the study of the phenomena occurring when light propagating in complex systems.
In particular, by using first principle simulations based on a finite difference parallel algorithm, I studied the transition from a diffusive photon transport regime to a strong localized state in a 3D strongly scattering system.
I carried out experiments aimed to understand the role of disorder in the formation of optical shock waves in several complex materials displaying a nonlinear optical response of thermal origin, ranging from liquid dyed solutions to silica aerogel. I participated to theoretical studies on the phenomenon of the wave-breaking that brought to the formulation of the first theoretical model, based on the Gamow vectors, to explain the intrinsic irreversibility of the dispersive shock even for an arbitrarily small amount of loss.
My most recent investigation has regarded the exploration of the role of randomness in otomechanics by means massive numerical simulations. I found that disorder enhances the optomecanical forces emerging at the interface of a random assembly of dielectric particles; these findings can foster the exploitation of light scattering for controlling the motion of dielectric micron sized structures.
Neda Ghofraniha