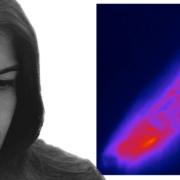 Spin-glass theory is one of the leading paradigms of complex physics and describes condensed matter, neural networks and biological systems, ultracold atoms, random photonics and many other research fields.

According to this theory, identical systems under identical conditions may reach different states. This effect is known as replica symmetry breaking and is revealed by the shape of the probability distribution function of an order parameter named the Parisi overlap.
However, a direct experimental evidence in any field of research is still missing.

Neda Ghofraniha and coworkers report in a paper published in Nature Communications on the first direct measurement of the Parisi overlap by using random lasers as a photonic spin glass system, and provide the first evidence of a replica symmetry breaking and a glassy light phase.