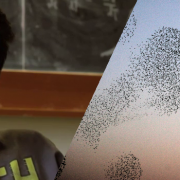 A paper on the collective behaviour of bird flocks, in which a spin wave model is brought to the continuous limit as in fluid elements of a large hydrodynamic system, has been published in Physical Review Letters and it has been the subject of a synopsis in the APS magazine Physics.

Both spin and density waves can propagate throughout flocks, but in some cases their contributions are quickly damped. Andrea Cavagna’s group at ISC has shown that only spin waves propagate in medium-to-small flocks, whereas density waves dominate in large flocks. In the intermediate region, neither waves propagate, which makes medium sized flocks unsustainable. As these “silent flocks” cannot properly coordinate their movements, they would be unstable, which may explain why bird flocks seem to obey certain size constraints.

The results may have implications for other animal groups, such as fish schools and mammal herds.