Anisotropies and non equilibrium in soft matter: routes to the self assembly of advanced material

Funding Body: MIUR FIRB (2013-2017) EUR 670k (ISC 240k)
Emanuela Zaccarelli
This research project is a joint experimental, theoretical and computational effort in the field of soft matter, with the aim of identifying and exploring new self-assembly routes of elementary constituents to create materials with novel properties[1]. This objective will be achieved by exploiting mainly out-of-equilibrium pathways[2] and through the use of particles with an anisotropy in the shape or in the interactions[3].
Strategies for the bottom-up construction of materials, based on a judicious choice of constituent macromolecules, are crucial for their potential applications in fields as diverse as biomedicine, nanotechnology, cosmetics, food science. These strategies often mimic those used by Nature[4] to obtain improved materials and enhance the quality of life, welfare and health of the humans and of the environment.
Up to now researchers focused mainly on model systems in which the particles are either spherical or interact isotropically, mostly via equilibrium processes. However, many systems of technological and industrial interest very often exhibit anisotropies or are the result of out-of-equilibrium processes. For example, non-spherical macromolecules are widely used for the production of high-definition displays due to their ability to organize into liquid crystalline phases; clays like bentonite are employed for their ability to form gels in various applications ranging from clumping cat litters to oil extraction; wormlike micelles are currently used as components of detergents and in the cosmetic industry, in particular for shampoos.
The reason for this apparent disinterest of basic research for anisotropic systems is to be found mainly in the limited availability of synthetic model systems of sufficient quality to perform accurate and repeatable experiments. Paradoxically, the gaps in chemical synthesis have often been filled by using natural anisotropic materials such as fibers (actin, myosin, ..), fragments of nucleic acids (DNA, RNA, …), rod-shaped viruses (mosaic virus, bacteriophage fd, …) that, owing to their rich phase behavior, have been used in the past for instance to test theoretical models on liquid crystals or for the study of their rheological properties. 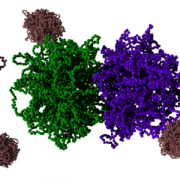 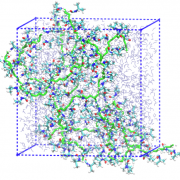