One of the new frontiers in condensed matter physics is development and engineering of electronic devices which carrier “bit” informations in the spin degree of freedom of the electronc instead of their charge. This research line is called indeed “spintronics”. Within this context the spin-or 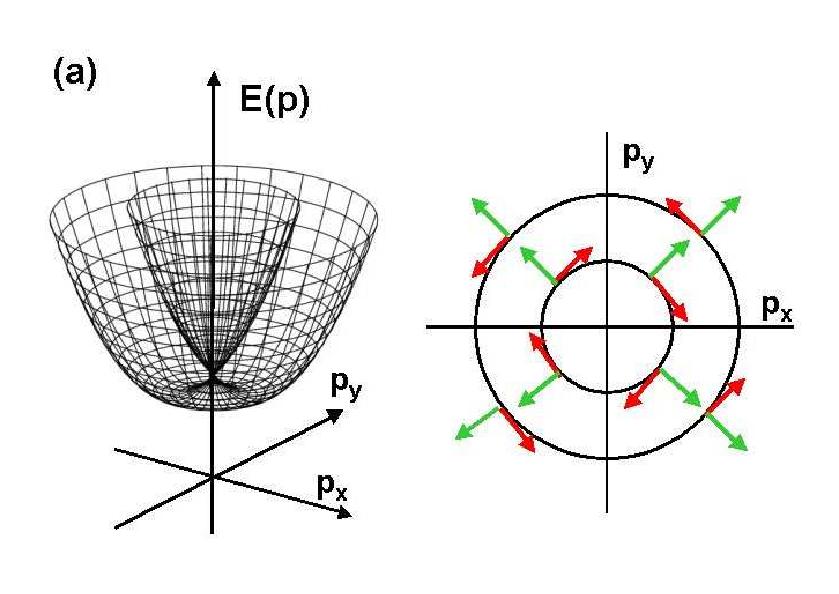 bit interaction plays a key role, since it permits to tune the spin properties by means of charge related fields, as an electric field. A remarkable example of this idea is the spin-Hall effect, whose dependence on the degrees of impurity scattering, on finite size effects and on the geometry of the device is nowadays largely debated. In general, two dimensional systems, as well as quantum dots, quantum wells etc. are analyzed. Spin-orbit interaction is in addition relevant also in three-dimensional systems as the non-centrosymmetric materials CePt3Si, Li2(PdxPt1-x)3B, where also unconventiomal superconductivity appears.

In our activity we focus on twodimensional electronic systems with Rashba or Dresselhaus spin-orbit interaction. Such systems are commonly realized in heterostructures and also in some surface alloys. We have shown in particular that: (i) the dynamical limit of the spin-Hall effect is not universal in the presence of retarded interactions and it is significantly renormalized in the presence of electron-phonon interaction; (ii) the nature of the vanishing of the static spin-Hall effect is significantly different in the high density and in the low density limit, i.e. in the low density limit it is not related to the vanishing of the vertex function but to a cancellation between on-Fermi surface and off-Fermi surface contributions; (iii) the topological change of the Fermi surface at low density has a deep effect of one-particle and on two particle (Cooper pairing) properties, strongly enhancing the tendency towards superconducting instabilities.