Blog - Latest News
You are here: Home1 / News2 / Thouless pumping of light with a twist – Nature Physics News and...

ISC researchers L. Pilozzi and V. Brosco write on a recent experiment [1] with photonic waveguides  which demonstrates the connection between non-Abelian holonomies and adiabatic particle transport, paving the way to the geometric and topological control of light trajectories.

The experiment by Sun and colleagues represents one of the few observations so far of the non-Abelian Wilczek–Zee holonomy. But by employing Thouless pumping as a tool for probing non-Abelian topological physics, it also paves the way for the geometric control of photon states and light trajectories in real space — a fundamental step in the direction of photonic information processing [2]. 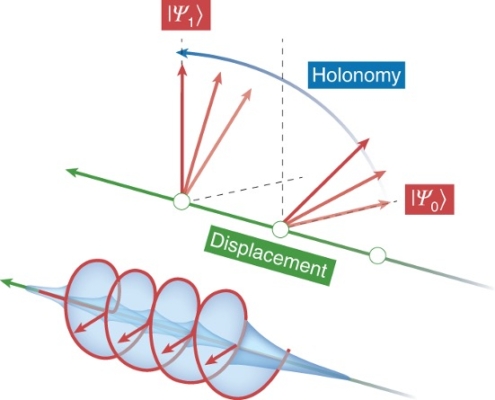 Non-Abelian pumping leads to a displacement along the lattice and a rotation among two degenerate subbands. Both these transformations are related to the Wilczek–Zee holonomy. The peculiar structure of the evolution featuring two π/4 rotations separated by a displacement highlights the non-Abelian character of pumping. The evolution of the state vector in a non-Abelian Thouless pumping cycle is reminiscent of helical motion, as depicted in the lower panel.