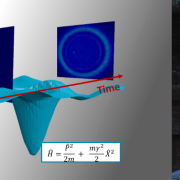 More than 30 years ago, Glauber theorized the existence of quantum systems to explain the link between the reversible microscopic and irreversible macroscopic scale. The formulation of such model is based on the so-called “rigged Hilbert space” and include irreversibility as a fundamental principle through the introduction of an inverted harmonic oscillator describing quantum amplifier.
The standard quantum mechanics does not forbid time-travel. However, according to the Glauber theory a quantum particle that decays cannot travel back in time and has quantized decay rates. In simple terms, this means that the arrow of time cannot be inverted at quantum level and, hence, the time travels are not possible.
Claudio Conti and co-workers (Silvia Gentilini, Maria Chiara Braidotti, Giulia Marcucci ed Eugenio DelRe), by following an original proposal of Glauber, simulated in the laboratory one of the simplest models of the irreversible quantum mechanics by exploiting a nonlinear optical effect to emulate a quantum particle in an inverted harmonic oscillator. In a paper entitled “Physical realization of the Glauber quantum oscillator” published on Sci. Rep. 5, 15816 (2015) is reported the first experimental evidence of the excitation of decaying states with quantized decay rates in a wave-breaking phenomenon.
These findings not only provide a complete treatment of all shock phenomena beyond the limit of nonlinear optics dynamic but also furnishes novel perspective to exploit shock waves in useful applications as lasers, optical amplifiers, white-light and X-ray generation.