Transcriptome Analysis in a Mouse Model of Premature Aging of Dentate Gyrus: Rescue of Alpha-Synuclein Deficit by Virus-Driven Expression or by Running Restores the Defective Neurogenesis

The dentate gyrus of the hippocampus and the subventricular zone are neurogenic niches where neural stem and progenitor cells replicate throughout life to generate new neurons. The Btg1 gene maintains the stem cells of the neurogenic niches in quiescence. The deletion of Btg1 leads to an early transient increase of stem/progenitor cells division, followed, however, by a decrease during adulthood of their proliferative capability, accompanied by apoptosis. Since a physiological decrease of neurogenesis occurs during aging, the Btg1 knockout mouse may represent a model of neural aging. We have previously observed that the defective neurogenesis of the Btg1 knockout model is rescued by the powerful neurogenic stimulus of physical exercise (running). To identify genes responsible for stem and progenitor cells maintenance, we sought here to find genes underlying this premature neural aging, and whose deregulated expression could be rescued by running. Through RNA sequencing we analyzed the transcriptomic profiles of the dentate gyrus isolated from Btg1 wild-type or Btg1 knockout adult (2-month-old) mice submitted to physical exercise or sedentary. In Btg1 knockout mice, 545 genes were deregulated, relative to wild-type, while 2081 genes were deregulated by running. We identified 42 genes whose expression was not only down-regulated in the dentate gyrus of Btg1 knockout, but was also counter-regulated to control levels by running in Btg1 knockout mice, vs. sedentary. Among these 42 counter-regulated genes, alpha-synuclein (Snca), Fos, Arc and Npas4 showed significantly greater differential regulation. These genes control neural proliferation, apoptosis, plasticity and memory and are involved in aging. In particular, Snca expression decreases during aging. We tested, therefore, whether an Snca-expressing lentivirus, by rescuing the defective Snca levels in the dentate gyrus of Btg1 knockout mice, could also reverse the aging phenotype, in particular the defective neurogenesis. We found that the exogenous expression of Snca reversed the Btg1 knockout-dependent decrease of stem cell proliferation as well as the increase of progenitor cell apoptosis. This indicates that Snca has a functional role in the process of neural aging observed in this model, and also suggests that Snca acts as a positive regulator of stem cell maintenance. 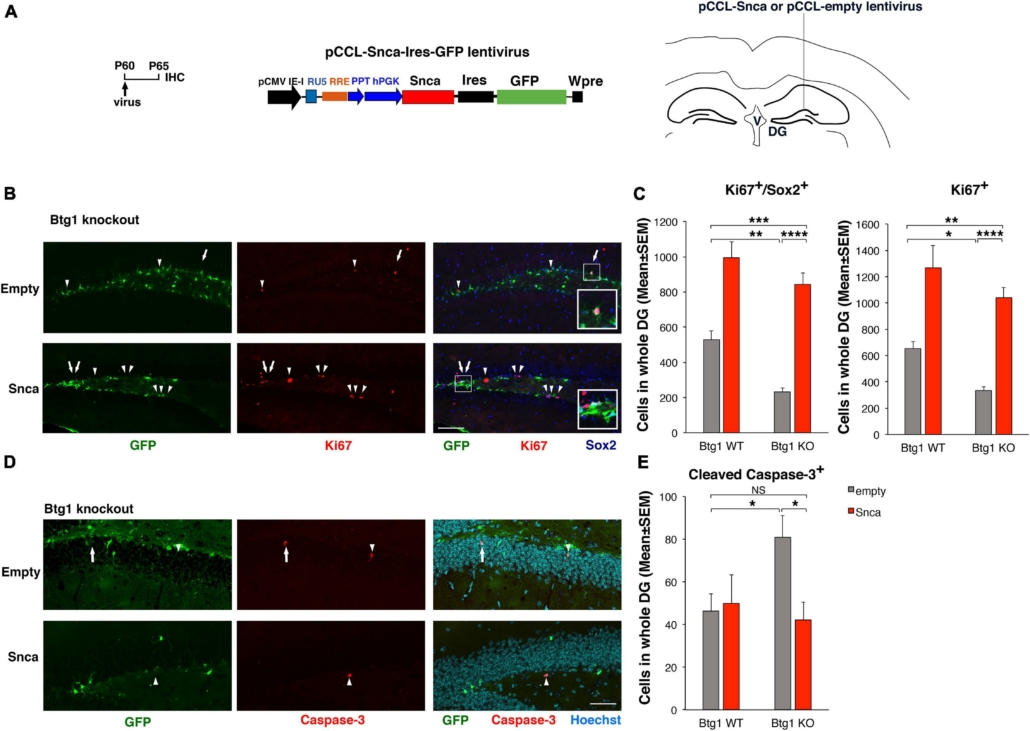 Talk by Maxime Bergman on October 5 at 3:00 p.m in Aula 2 Ed. Fermi, Sapien...
Scroll to top
This website uses cookies to improve your experience. We'll assume you're ok with this, but you can opt-out if you wish.Accept Read More
Privacy & Cookies Policy