Antibiotic ineffectiveness represents a global health issue that demands the development of drugs circumventing microbial resistance mechanisms and attacking new bacterial targets. Graphene oxide (GO), a precursor of large-scale graphene synthesis, is stable in water, and easy to functionalize with drugs and proteins. We investigated possible antibacterial mechanisms of GO related to its stability in solution and surface charge: GO sheets cut bacteria membranes in the absence of ions (i.e. dissolved in ultrapure water. In other solutions, the primary antibacterial mechanism is the wrapping and isolating bacteria from the external environment and nutrients. GO is also effective against coronavirus and can be used in fabrics to prevent virus growth. We also exploited GO large surface area to vehiculate drugs against several types of pathogens. 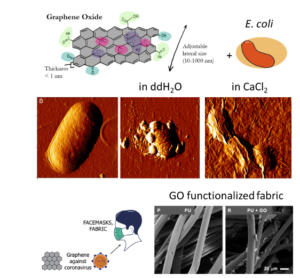 Can graphene take part in the fight against COVID-19?

The pneumonia outbreak of coronavirus disease 2019 (COVID-19) represents a global issue. The bidimensional material graphene has captured much attention due to promising antimicrobial applications and has also demonstrated antiviral efficacy. In response to this global outbreak, we summarized the current state of knowledge of graphene and virus interaction as well as possible successful applications to fight COVID-19. Antibody-conjugated graphene sheets can rapidly detect targeted virus proteins and can be useful for large population screening, but also for the development of environmental sensors and filters, given the low cost of graphene materials. Functionalized graphene has demonstrated a good viral capture capacity that, combined with heat or light-mediated inactivation, could be used as a disinfectant. Graphene sensor arrays can be implemented on standard utility textiles and drug efficacy screening. Thanks to its high versatility, we foresee that graphene may have a leading role in the fight against COVID-19. 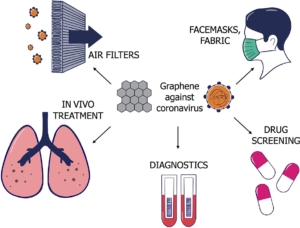 The development of new pharmacological strategies that evade bacterial resistance has become a compelling worldwide challenge. Graphene oxide (GO) can represent the nanotechnology answer being economical and easy to produce and to degrade and having multitarget specificity against bacteria. Several groups tried to define the interaction between GO sheets and human pathogens. Unfortunately, controversial results from inhibition to bacterial growth enhancement have been reported. The main difference among all experimental evidence relies on the environmental conditions adopted to study the bacteria–GO interaction. Indeed GO, stable in deionized water, undergoes a rapid and salt-specific DLVO-like aggregation that influences antimicrobial effects. Considering this phenomenon, the interaction of bacteria with GO aggregates having different sizes, morphologies, and surface potential can create a complex scenario that explains the contrasting results reported so far. In this article, we demonstrate that by modulating the GO stability in solution, the antibacterial or growth enhancement effect can be controlled on S. aureus and E. coli. GO at low concentration cuts microorganism membranes and at high concentration forms complexes with pathogens and inhibits or enhances bacterial growth in a surface potential-dependent manner. With the framework defined in this study, the clinical application of GO gets closer, and controversial results in literature can be explained.

Tuberculosis (TB) remains one of the most alarming worldwide infectious diseases and there is an urgent need for new drugs and treatments, particularly for the emergence and spread of drug-resistant Mycobacterium tuberculosis (Mtb) strains. New nanotechnologies based on carbon nanomaterials are now being considered to improve anti-TB treatments, and graphene oxide (GO) showed interesting properties as an anti-TB drug. GO, which preferentially accumulates in the lungs and is degraded by macrophagic peroxidases, can trap Mycobacterium smegmatis and Mtb in a dose-dependent manner, reducing the entry of bacilli into macrophages. In this paper, combinations of isoniazid (INH), amikacin (AMK) and linezolid (LZD) and GO anti-mycobacterial properties were evaluated against Mtb H37Rv by using a checkerboard assay or an in vitro infection model. Different GO effects have been observed when incubated with INH, AMK or LZD. Whereas the INH and AMK anti-mycobacterial activities were blocked by GO co-administration, the LZD bactericidal effect increased in combination with GO. GO-LZD significantly reduced extracellular mycobacteria during infection and was able to kill internalized bacilli. GO-LZD co-administration is potentially a new promising anti-TB treatment at the forefront in fighting emerging antibiotic-resistant Mtb strains where LZD administration is suggested. This innovative pharmacological approach may lead to reduced treatment periods and decreased adverse effects. More importantly, we demonstrate how nanomaterials–drugs combinations can represent a possible strategy to quickly design drugs for pandemics treatment.