Topology is a way to classify a physical system considering how its parts connect rather than just through usual properties like color, mass, length and microscopic symmetries. The first example of a quantum system, with properties dictated by its topology rather than the symmetries of the Hamiltonian, has been, in the early 1980s, the quantum Hall regime of a two-dimensional electron gas system. Specifically, topology led to a system topologically distinct from all previously known states of matter: a topological insulator having an insulating bulk and conducting edge states. These states are the hallmark of nontrivial topological order and arise due to the boundary conditions; they require an external magnetic field which breaks time reversal symmetry. However topological insulator is a generic concept which may appear in any insulating system. The first example beyond the quantum Hall effect is the Haldane model: a prototype model which realize the anomalous quantum Hall effect in a 2D honeycomb lattice with nearest-neighbor coupling and complex next-nearest-neighbor hopping that break the time reversal symmetry. Approaches relying on magneto-optical effects are however extremely weak at optical frequencies. For this reason, a wide variety of additional schemes have been considered as alternative ways to simulate the effects of gauge field for photons. In particular, we model topological features in optical arrays by the implementation of synthetic gauge fields due to the modulation of the optical lattice parameters. This allows obtaining edge states as localized states at the border of the system leading to explore new physics and develop optical devices with built-in. protection 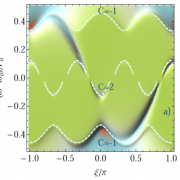 The cascade of resonant PT-symmetric topological structures is shown to emit laser light with a frequency comb spectrum. We consider optically active topological lattices supporting edge modes at regularly spaced frequencies. When the amplified resonances in the PT-broken regime match the edge modes of the topological gratings, we predict the emission of discrete laser lines. A proper design enables the engineering of the spectral features for specific applications. Topological protection makes the system very well suited for a novel generation of compact frequency comb emitters for spectroscopy, metrology, and quantum information.